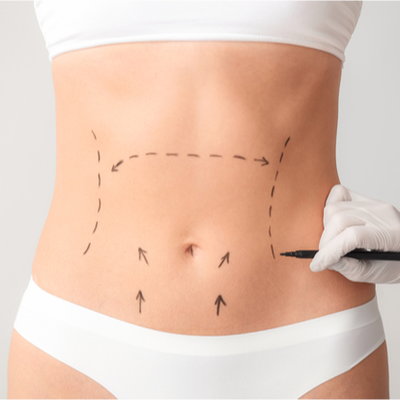 Living with excess abdominal skin can certainly have an impact. If you are uncomfortable with loose skin in your stomach area, you may want to consider an abdominoplasty to remedy this area once and for all.

What is an Abdominoplasty?

The common name for an abdominoplasty is a “tummy tuck.” Abdominoplasty is a major surgery used to remove extra skin and fat from the abdominal area or belly. A tummy tuck also tightens the muscles in the abdomen to give people who have the surgery a flat and more desirable midsection.

Benefits of an Abdominoplasty

Who is a Candidate for an Abdominoplasty?

Though commonly thought of as a surgery women have after their abdominal skin is stretched from having children, men also have this surgery. In addition to being used for women who have stretched skin from carrying babies, this surgery can be performed on people who have had large weight losses and now have excess skin in the abdominal region. The best candidates are generally healthy people who are now at a stable weight, don’t expect large future changes in their weight, don’t smoke, and do not like the way their abdomen area looks.

Mini Abdominoplasty: The surgeon uses smaller incisions, or cuts, in the skin. This is a shorter surgery and is usually used for people with less excess belly skin to remove.

Full Abdominoplasty: This is the most extensive tummy tuck option and is used for cases that need the most improvements. Cuts are made at the bikini line area and around the belly button. Stomach muscles may be sewn together, fat may be removed with liposuction, and excess skin will be removed.

Extended Abdominoplasty: The extended tummy tuck is similar to the full tummy tuck but includes the removal of fat on the sides of the belly and lower back. Sometimes the surgery also includes fat on the upper thighs.

Endoscopic Abdominoplasty: The endoscopic tummy tuck uses smaller incisions than other types of abdominoplasty. Surgeons use an endoscope, or a medical device with a light, to better view their operating areas. Since visibility is better, smaller cuts in the skin are needed. This should result in less scarring and less recovery time.

Risks of an Abdominoplasty

Since an abdominoplasty is major surgery, a person should carefully consider risks before the procedure. Risks include:

Talk with a board-certified plastic surgeon to learn more about abdominoplasty and if this is the right procedure for you.